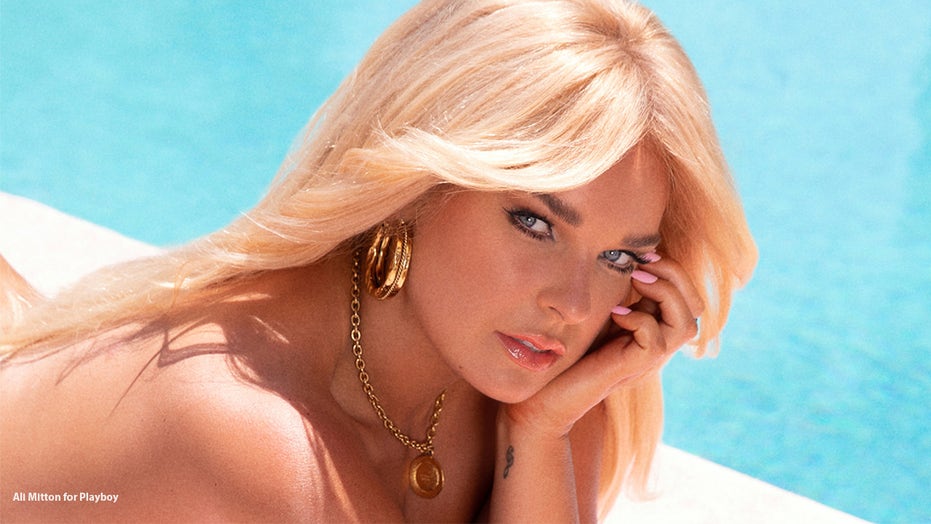 Meet Ali Chanel, Playboy's curviest Playmate: 'I think the world is ready to accept all bodies'

EXCLUSIVE: Ali Chanel didn’t envision herself as a model, let alone stripping down for the pages of Playboy.

But after Gabrielle Reece, former Playboy cover star and professional volleyball player, encouraged her to pursue modeling, Ali decided to give it a shot — and it paid off.

For Chanel, posing in the buff is a major milestone — one that she hopes will encourage other women to embrace their bodies at any size.

PLAYBOY MODEL VICTORIA VALENTINO ON SPEAKING OUT AGAINST BILL COSBY: 'IT WAS ABSOLUTELY LIBERATING’

Chanel spoke to Fox News about being a Playmate, shooting during a pandemic and how motherhood has made her more confident over the years.

Fox News: What does the title of Playmate mean to you?
Ali Chanel: It means so much more to me now than I thought it would ever mean. In the beginning, I thought it was just like, “Oh cool. I'm going to take a bunch of pretty pictures and hopefully inspire some girls and maybe open some new doors.” Now I realized that it's so much bigger than myself.

Ali Chanel says she was inspired by Brigitte Bardot for her photoshoot with Playboy. (Ali Mitton/Playboy)

It's for everyone. I think the world is just ready to accept all different kinds of bodies and realize that we're all worth loving. And I think that it's just so empowering because there are so many people that feel unseen and misrepresented in media today. It just feels so special that I get to be that girl for sure.

Fox News: How were you discovered by Playboy?
Chanel: My agent from Natural Model in LA called me one day and she’s like, “What are you doing tomorrow?” I was like, “I don’t know, I’m drowning in laundry. I need to clean my house. I have so many chores to do.” And then she goes, “Playboy wants to see you.” I was just so nervous because I really didn’t know what to expect.

The idea of getting naked made me really nervous. But when I went in, I was welcomed by two girls my age or younger. We had the most amazing conversation that left me feeling empowered. I’m really grateful to stand on this platform because I stand for everything that they stand for.

Ali Chanel says Playboy was careful during shooting due to the ongoing coronavirus pandemic. (Ali Mitton/Playboy)

Fox News: What was the day of the shoot like for you?
Chanel: You know, I didn’t even think about being naked on set. It wasn’t even a thought in my mind. I wasn’t nervous about it at all [anymore]. I knew that it was going to be an amazing day and everyone was going to take care of me. The process and what comes with being a Playmate is so amazing. I was a part of every single step of the shoot and the creative process.

Fox News: Due to the ongoing coronavirus pandemic, how was this shoot, which took place in July, different?
Chanel: Because of COVID, it was different from a typical shoot. There were more restrictions… it was a more intimate set… [But] everyone worked so hard. Playboy did a great job. They took all of our temperatures. Everyone was very a mask. There were so many hand sanitizers and everything you can think of on set. There was no hugging, which was really hard for me. But I felt really safe. Everyone was just making sure that everyone [else] was OK. Everyone felt comfortable.

Fox News: What was it like seeing those photos for the first time?
Chanel: I was mind-blown. First of all, I don’t really do my hair or wear makeup in person. In my shoot, I had a full-on wig, lashes and makeup. They killed it. It was such a shock because I don’t normally see myself like that. I was so proud of myself. It was such an insane thing to wrap my head around… I was just excited for everyone to see them and just to start making people uncomfortable and shaking some things up *laughs*.

Fox News: Who was your first phone call after you saw the photos?
Chanel: My mom. I’m really close with my mom. She was the first person I told when I got the interview with Playboy. She was so proud of me and has always been. She has always been such a rock in my life. So of course, she was the first person I called. I showed her everything. It’s really important for me to get her opinion because I respect her so much.

Fox News: For your shoot, you channeled Brigitte Bardot. Why?
Chanel: Immediately, when they asked for my inspiration, my favorite things, she was the first thing that came to mind. Everything about her is so feminine and powerful. She just owns her woman-ness, you know? I just really wanted to embrace that. I thought it was so powerful. And when I think of Playboy, I think of the vintage Playmates. I just think they’re so timeless. And so, I really wanted to create that timeless photoshoot again.

Fox News: How important has been for Playboy to show that sexy doesn’t come in one size?
Chanel: Growing up, I think every woman struggles with self-doubt and body image. There’s just so much press, especially in today’s world… To have a chance to tell my story and now just show pictures of myself sexy and all done up is for the girls… I’m just a normal girl who has struggled with those things, too. Not every day is butterflies and perfect. It’s not every day that I feel good about myself.

Ali Chanel wanted to show that beauty does not come in one size, especially when it comes to being a Playmate. (Ali Mitton/Playboy)

…The messages from women, the love and support I’ve been receiving, has been overwhelming. They’ve been pouring their hearts out to me, telling me their stories. And I have cried so many times reading these messages.

Fox News: You’ve also been getting messages from guys. What’s that been like?
Chanel: The most surprising [thing] has been reaching men. I mentioned [in my Playboy story] that I was a 27-year-old virgin. And so a lot of those messages have been men reaching out to me, letting me know how they respect this so much or telling me their stories of how they’re still virgins or how their wives [don’t] feel confident. They showed them my pictures and they say thank you because their wives look up to me or their girlfriends, things like that.

When you get messages from men, you expect them to be, you know — I don’t want to disrespect *laughs*. You know what I mean? So that was just so heartwarming because men have feelings and emotions too.

Ali Mitton says she has received encouraging messages from both women and men. (Ali Mitton/Playboy)

Fox News: You’re now a parent. How has motherhood made you more confident?
Chanel: When you become a mom, you go through so much in such a short amount of time. You feel like a warrior. I feel unstoppable. I just feel like I have conquered so many obstacles and then you have this tiny human [who] thinks that you are God.

And yes, it’s so much pressure, but at the same time, I want to be the best human I can be. And there’s no stopping me now. That’s what it feels like. I feel like I’m on top of the world. I feel like I’m going to do everything I can for my little girl and be an example to her, just like my mom did for me.

Fox News: Some critics may think there’s no way you can be a role model for a young girl and pose for Playboy. What’s your response?
Chanel: That’s such a funny thought — that anyone thinks they have the right to tell me how to live my life. When you’re a parent, people keep trying to tell you how to raise your own child. She’s my own baby. I get to raise her. That’s how I feel about my own body and my own life -- live and let live.

Ali Chanel admitted she was initially worried about stripping down for Playboy. (Ali Mitton/Playboy)

… I was a 27-year-old virgin. I lost my virginity to my first boyfriend and we have a baby together… I don’t regret any choices that I’ve made in my life. I’m very proud of who I am and where I’ve been… Now that I’ve done Playboy, I just feel free. There’s just something that happens. It was another big step in my life too.

Fox News: What advice would you give to a mom who wants to feel sexy and confident, but doesn’t know where to begin?
Chanel: You have to understand that it’s already in you. I think everyone’s searching. They think, “Oh, if I do this, then I’ll be sexy.” “If I look like this, then I’ll be sexy.” It’s already there. I think you just have to… be grateful for what you already have. Like as a mom, some women feel so gross or dirty when they're breastfeeding. They don’t feel like their bodies are theirs anymore.

Ali Chanel has plenty of advice for other moms wanting to feel just as confident. (Ali Mitton/Playboy)

If you think about the fact that you are keeping a human alive, that you grew a human inside your body, how is that not empowering? There’s something so empowering about that… For me at least, how could you not feel empowered and then want to show off your body? That is such an easy thing for me in my mind to think about.