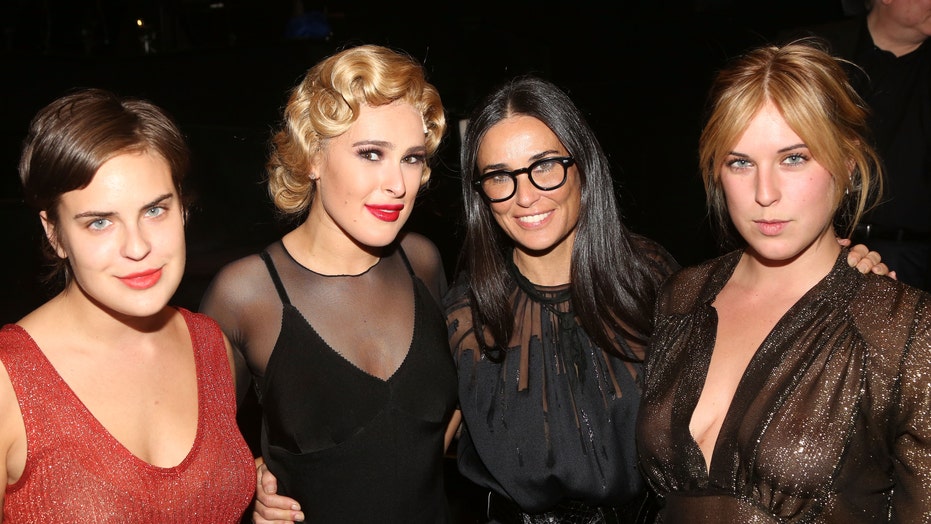 Demi Moore and her daughters, Rumer and Scout, are casting their votes in style.

The family members posed for a stunning black-and-white photoshoot and posted some shots on Instagram. On Rumer's page, she's sitting on top of a vintage convertible car in a ballgown and tiara.

The caption reads, "Sorry Mama, I’m on my way to drop off my Ballot."

On Demi's page, she posted an image of the three of them posing in the middle of a wooden road. Demi is in the foreground while Rumer is leaning on the car and Scout is attempting to hitchhike in the background.

Moore's ex-husband and the father of her three daughters, Bruce Willis, commented with a thumbs-up emoji. The couple's third daughter Tallulah wasn't involved in the outdoors shoot photographed by Tyler Shields.

Moore and Willis were married from 1987–2000 and have remained close friends and co-parents after their split.

In fact, she constantly loves to tease him on social media including, before the Emmy Awards last month, when she posted a throwback image of the two of them in full 90s fashion.

Moore, now 57, wore all black in a single-breasted jacket and pants. Willis, now 65, wore a traditional tux with an almost floor-length jacket.

“1987 #Emmys… arriving in style,” the “Ghost” actress captioned the photo.

Willis hosted the 1987 Emmys and took home the award for outstanding lead actor in a drama series for his role on “Moonlight.”

The “Pulp Fiction” star also has two daughters -- Mabel, 8, and Evelyn, 6 -- with his current wife, model and actress Emma Heming Willis, whom he married in 2009.

During the pandemic, Willis, Moore, and Heming, 42, quarantined together in Idaho with their daughters at the home where Willis and Moore’s children grew up.