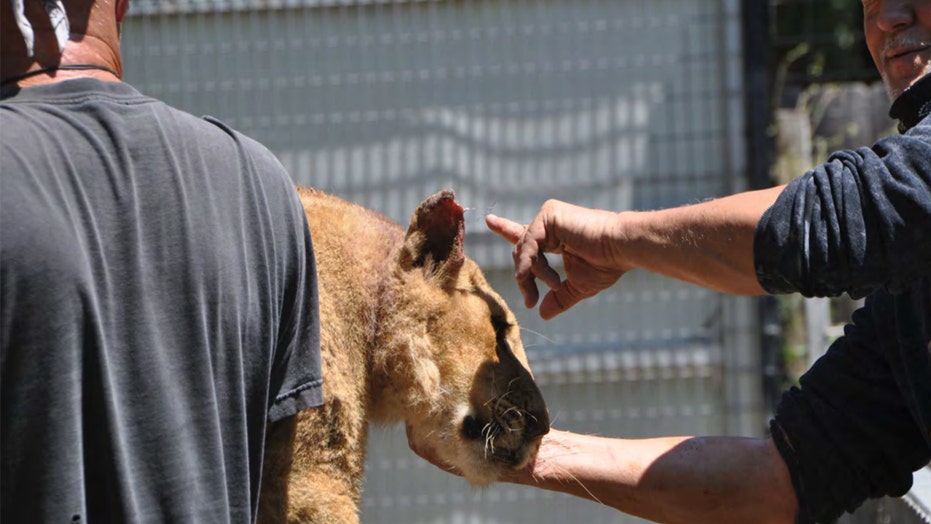 The juvenile cats came to the Greater Wynnewood Exotic Animal Park, or G.W. Zoo, from Tim Stark, according to People for the Ethical Treatment of Animals, which filed the lawsuit.

They are now in the care of The Wild Animal Sanctuary, a nonprofit with massive wildlife refuges in Colorado and Texas.

PETA claims that one of them, a young lioness named Nala, was so ill during a U.S. Department of Agriculture inspection in June that investigators halted the visit and ordered her immediately taken for veterinary care.

The juvenile cats seized Monday include Nala, a lion cub who was suffering from a respiratory infection during a June inspection of the zoo, according to authorities. (USDA)

"She had a string of purulent nasal discharge hanging from her right nostril and had an accumulation of green discharge in her eyes," the inspector’s report reads. "Her respiration was shallow and rapid.”

Rescuers found “severe lameness” in one of Nala's legs Monday morning and said she would undergo a full examination at the sanctuary, according to a PETA spokesman.

Stark is believed to have provided a fourth lion to the G.W. Zoo that also would have been seized, but that one reportedly died in August, according to PETA.

Lowe has called the USDA's investigation into alleged neglect misleading.

After having his exhibitor’s license suspended by the USDA after a series of inspections throughout the summer, he posted messages on Facebook saying he was forfeiting it all together. Rather than exhibiting animals at a new facility in Thackerville, Lowe will use it as a private film set, the New York Post reported.

A whistleblower's June photograph of a young lion suffering from a skin-eating condition called flystrike. (PETA)

PETA is also filing a notice of intent to sue G.W., a new Thackerville facility, Lowe and associates in a new legal action under the Endangered Species Act.

The filing alleged a number of violations, including denying animals proper nutrition and veterinary care as well as prematurely separating cubs from their mothers. PETA is offering to drop the lawsuit if Lowe gives up his animals and agrees not to possess ESA-protected animals in the future.

“If Lowe wants to save himself from litigation and a tough fight in court and in the public sphere, then he will take PETA up on its offer,” said Brittany Peet, an attorney for the nonprofit.

Lowe, G.W. Zoo and Wildlife in Need -- the facility Stark is the director and owner of -- did not immediately respond to Fox News' request for comment.