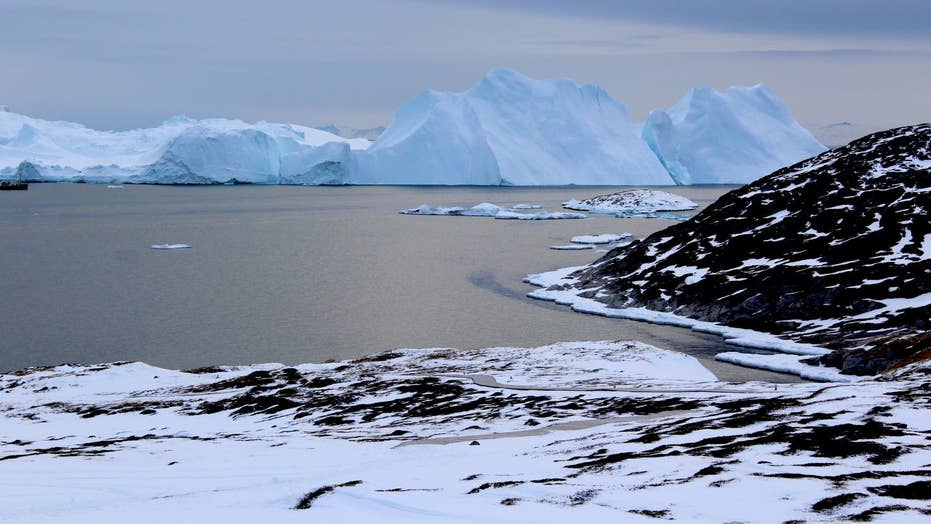 The Greenland ice sheet has reached a "point of no return" and will continue to shrink even if global temperatures stopped rising today, according to a new study.

The research, published in the journal Communications Earth & Environment, a journal from Nature Research,, found that the ice sheet is at a point where the snowfall replenishing the ice sheet is not able to keep up with the ice melt, losing approximately 500 gigatons (500 billion tons) of ice each year.

"We've been looking at these remote sensing observations to study how ice discharge and accumulation have varied," said the study's lead author, Ohio State University researcher Michalea King, in a statement. "And what we've found is that the ice that's discharging into the ocean is far surpassing the snow that's accumulating on the surface of the ice sheet."

Icebergs near Greenland form from ice that has broken off--or calved--from glaciers on the island. A new study shows that the glaciers are losing ice rapidly enough that, even if global warming were to stop, Greenland's glaciers would continue to shrink. (Credit: Michalea King)

In May, a pair of satellite images revealed that Earth's ice melt was noticeable from space, depicting 16 years of ice loss in Greenland and Antarctica.

"Glacier retreat has knocked the dynamics of the whole ice sheet into a constant state of loss," study co-author and King's adviser, Ian Howat, added."Even if the climate were to stay the same or even get a little colder, the ice sheet would still be losing mass."

The researchers looked at more than three decades of monthly satellite data from more than 200 glaciers to come up with their findings. During the 1980s and 1990s, the team found the amount of snowfall largely replaced the amount of ice lost to the ocean. Around 2000, the ice loss started increasing more rapidly, King added.

"Glaciers have been sensitive to seasonal melt for as long as we've been able to observe it, with spikes in ice discharge in the summer," she explained. "But starting in 2000, you start superimposing that seasonal melt on a higher baseline--so you're going to get even more losses."

The Greenland ice sheet has been in trouble for some time. In July 2019, it was reported the sheet lost 217 billion tons of ice, the worst melting since 2012.

In March, a study said Greenland lost 600 billion tons of ice by the end of summer 2019, enough to raise global sea levels 2.2 millimeters in just two months by itself. Global sea levels have been rising by approximately 3 millimeters per year, according to the National Oceanic and Atmospheric Administration.

OVER 11,000 SCIENTISTS WARN OF 'CLIMATE EMERGENCY'

Though the findings of the newly published study are dire, there is a silver lining to the research, King pointed out.

"It's always a positive thing to learn more about glacier environments, because we can only improve our predictions for how rapidly things will change in the future. And that can only help us with adaptation and mitigation strategies. The more we know, the better we can prepare."

Ocean levels are rising due to climate change and the long-held view is that sea levels will rise nearly three feet by the year 2100.

In October 2019, researchers published a study that suggested rising sea levels could flood coastal areas that up to 480 million people call home.

A separate study published in August 2019 suggested that sea ice in the Arctic could completely disappear through September each summer if average global temperatures increase by as little as 2 degrees Celsius and climate conditions continue to worsen.

In November 2019, the Trump administration began the process of pulling out of the landmark 2015 Paris climate agreement. Secretary of State Mike Pompeo's statement that month touted America's carbon pollution cuts and called the Paris deal an "unfair economic burden" to the U.S. economy.

Nearly 200 nations, including China, signed the climate deal in which each country provides its own goals to curb emissions of heat-trapping gases that lead to climate change.