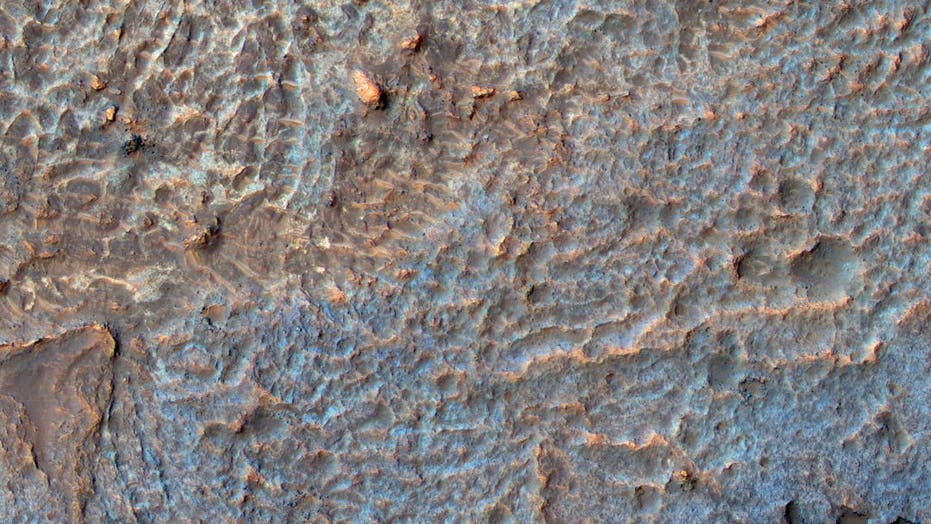 NASA has spent years observing and exploring Mars, but the Mars Reconnaissance Orbiter took a picture of a ridged portion of the Martian surface last month that is "puzzling" to researchers.

The image, taken by the HiRise Context camera, was enhanced with color to help correlate rock units, but that has left more questions than answers about the area known as Aureum Chaos.

The team at the University of Arizona, which operates the HiRise camera, offered a suggestion for how the area formed.

MASSIVE LAVA TUBES ON MARS AND THE MOON COULD BE HOME TO LIFE, RESEARCHERS FIND

"A crudely polygonal patterned ground was created by stresses in the sediments, and groundwater followed the fractures and deposited minerals that cemented the sediments," the researchers wrote in a blog post. "This was followed by perhaps billions of years of erosion by the wind, leaving the cemented fractures as high-standing ridges."

"Of course, this story is almost certainly incomplete if not totally wrong," the researchers added.

According to NASA, the Aureum Chaos is a "229-mile wide area in the eastern part of Valles Marineris." The region is rough and collapsed, which makes it difficult for rovers to explore.

However, the Ingenuity helicopter attached to the recently launched Perseverance rover could eventually help explore this region of the Red Planet.

In August, NASA reached a "big milestone" on its latest mission to Mars, as the space agency was able to power up the helicopter's six lithium-ion batteries.

BACTERIA COULD HAVE TRAVELED FROM MARS TO EARTH, CHANGING WHAT WE KNOW ABOUT HOW LIFE FORMED

NASA's Perseverance rover, which recently left Earth on its way to the Red Planet, will perform a number of tasks on Mars, including looking for fossilized evidence of extraterrestrial life.

Much is still being learned about the Martian terrain and atmosphere. Earlier this week, the Curiosity rover spotted a "dust devil" in the Gale Crater.

NASA's long-term goal is to send a manned mission to Mars in the 2030s.