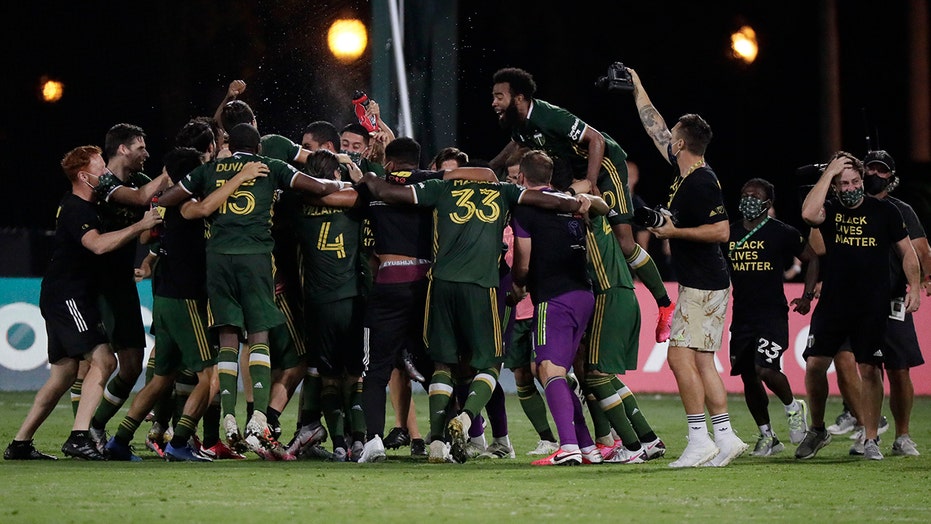 Soaked in sweat and doused in water, the Portland Timbers hoisted the MLS is Back trophy at midfield and then headed toward a giant TV screen filled with fans cheering from afar.

It was a huge Zoom party. It might just be the way to celebrate championships in 2020.

Dario Zuparic’s first goal of the season gave Portland a 2-1 victory against Orlando in Major League Soccer's return tournament finale Tuesday night, capping a month-long event that showed sports can be played safely inside a bubble.

“I always think the more difficult the fight is the more beautiful the victory is at the end,” said Portland's Larrys Mabiala, who scored the game's first goal.

Orlando was slow to react to Diego Valeri’s corner kick in the 66th minute, allowing Eryk Williamson to collect the ball, change direction and take a shot that Jeremy Ebobisse deflected to Zuparic’s feet. Zuparic didn’t have to do much to get it by Pedro “The Octopus” Gallese, who had made two fantastic saves in the lead-up to the corner kick.

The goal started the celebration on Portland's sideline and sent Orlando into panic mode. The Lions had a chance in the closing minutes, but failed to get the equalizer.

“It’s a group of players in a lot of pain right now," Orlando coach Oscar Pareja said. "Things didn’t bounce our way. We made a couple of mistakes.”

The Timbers, who spent 39 days in the MLS bubble and remained on West Coast time, hugged and danced after the final whistle. They raised the silver trophy while hooting and hollering. But the lasting image will be players and coaches waving at a camera and reaching hundreds back home.

It ended a wild month for the MLS, which managed to play 51 matches in 45 days at ESPN’s Wide World of Sports complex at Disney World.

No family. No friends. No fans.

But it was by most accounts a rousing success, especially considering how it started. FC Dallas and Nashville were forced to withdraw days before the start because of positive coronavirus tests.

Players, coaches and support personnel were tested regularly inside the MLS bubble. The league reported just two positives out of nearly 35,000 tests following the initial setbacks that threatened to derail a tournament that came with a $1.1 million purse.

“We just told ourselves we need to make it worth it," Mabiala said, adding that his son has been calling, crying and clamoring for him to come home in recent days.

Portland will get $328,000 in prize money to split. The Timbers also earned a berth in the CONCACAF Champions League, their first since 2016.

Orlando's appearance in the finale was a surprise considering the team finished 11th out of 12 in the East last season and fired coach James O’Connor. Pareja took over in 2020 and made an immediate impact.

Pareja convinced his players, including star Nani, to settle into the bubble several days early. They won the tournament opener, a group-stage victory against Miami, and ended up spending nearly seven weeks quarantined in the bubble.

Portland’s experience — the Timbers won the MLS title in 2015 and were runners-up two years ago — showed in the finale.

Portland’s first shot on goal found the back of the net. Valeri delivered a perfectly placed free kick into the box that Mabiala headed past Gallese in the 27th minute. It was Valeri’s 93rd assist with the Timbers.

But considering Portland has managed just three clean sheets in its last 23 matches, it was no surprise to see a defensive breakdown just a few minutes later.

Nani worked the ball down the left side following a turnover and created enough room to get a crosser into the box. Mauricio Pereyra got a foot on the ball and then took advantage of a fallen defender to tie the match.

The equalizer came shortly after Portland’s Sebastian Blanco exchanged words with Pareja during a hydration break. Referees stepped between them, and they later apologized and hugged it out.

The league resumes its regular season Wednesday night with Dallas playing at Nashville. The league’s 26 teams will play 18 games apiece. A majority of the games will be played without fans because of local regulations. Teams will be subject to a rigorous testing protocol and will use charter flights or buses to limit outside contact.

“We have to see if it works,” MLS Commissioner Don Garber said. “If it does, we go through with it. If it doesn’t, we’ll have to adjust.”