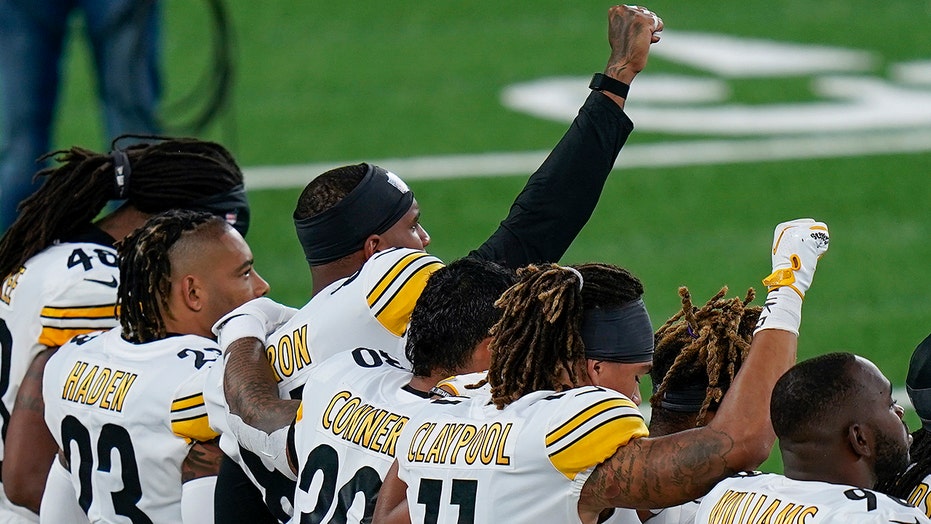 Pittsburgh Steelers players stood for the national anthem ahead of their game against the New York Giants on Monday night and had a message for the fans watching at home.

Pittsburgh players held a banner, which read “Steelers Against Racism.” The banner also listed each of the players’ hometowns.

Steelers coach Mike Tomlin said in June he would support players if they chose to kneel.

“Our position is simple,” Tomlin said at the time. “We are going to support our players and their willingness to partake in this, whether it is statements or actions. You guys know my feelings, I have stated them in the past. Statements are good, but impact is better. Particularly long-term impact.”

On the other side, some New York Giants players kneeled during the anthem.

Teams have taken different approaches in their demonstrations during the first week of the season. Players have stayed in the locker room for the national anthem and the playing of “Lift Every Voice and Sing.” Other teams have stayed out for both songs.

One of the more unique demonstrations took place during Sunday’s game between the Atlanta Falcons and the Seattle Seahawks. Players took a knee during the opening kick-off.

The NFL expressed its support for the players’ decision.

“During the Kickoff in Atlanta, players on both teams exercised their right to bring attention to social injustices that have persisted in the Black community for many years. We stand by the players in the quest for equality,” the NFL tweeted on its official account.

Ryan Gaydos is the sports editor for FoxNews.com. Follow him on social media @Gaydos_
https://www.revenuenetworkcpm.com/suxp85rw?key=53d3779b7a34905bb0164bc138cf9e3e